The Architect’s Companion is back, and ready to tackle the hard-hitting question: if our favorite “Mad Men” characters were famous 20th century architects, who would they be?

Everybody loves a good martini. And, everybody loves a good architect. Some of the most well-known architects of the 20th century shared common attributes that allowed them to rise to the top, garnering a place in the annals of stardom: wittiness; thoroughness; pristine tweed suits. These characteristics are not all that uncommon of the advertising moguls of the 1960s – the “architects” of their industry.

I have yet to meet a single person with creative sensibilities who is not extremely intrigued by AMC’s acclaimed series “Mad Men”, which ignites an undisputed desire to be great – along with the desire to drink copious amounts of well-aged scotch. But what if these relentlessly ambitious yet oddly charming characters were not only masters of the advertising scene, but also masters of the built environment? Who would their doppelgängers be? Luckily, the Architect’s Companion is here to bring closure to all the unanswered questions that have been keeping you up at night.

In no particular order: 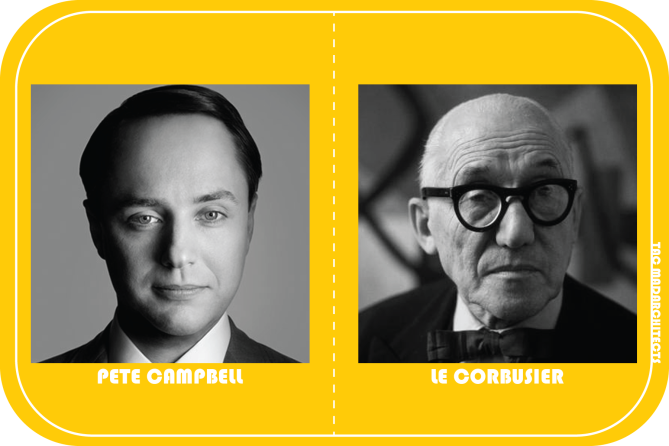 Pete Campbell: a man who carries himself with an heir of arrogance, never doubting his own self-worth. Although he is the first to let everyone know how great he is, his ambition speaks volumes. This is evidenced by his landing of the Clearasil account, a major gain for his company. His drive is the token attribute that ultimately leads to him becoming partner at Sterling-Cooper. Too bad his name never made it on the door.

Le Corbusier shared a similar ambition. His works paved the way for many of the modernist ideals still prevalent today. Though his self-confidence bordered on arrogance at times, his overall demeanor was geared toward promoting human welfare and comfortable living for those in high-density, urban areas. I wonder if he would have enjoyed New York City? 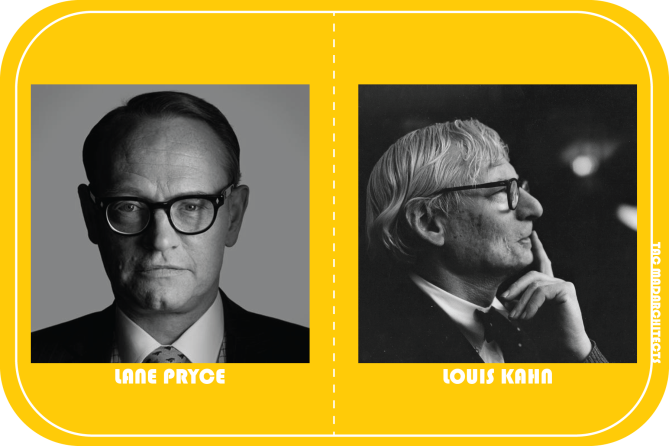 Lane Pryce: a man whose stoic exterior masks an intellectual and deliberate business savvy. Plus, he has a really cool accent. Although a later addition to the team at Sterling-Cooper, Lane brings to the company years of experience in the advertising field, and the drive to make Sterling-Cooper one of the top ad agencies in New York City. He also had some pretty sticky fingers.

Louis Kahn was one of the most provocative and influential architects of the 20th century, and I hear that he loved the ladies. His fascination with monolithic structures demarcated by austere material palettes created an honest architecture true to their form. Did I mention he loved the ladies? 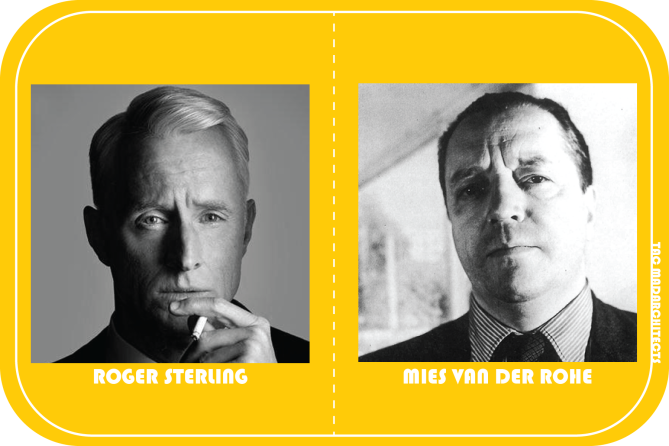 Roger Sterling: a forerunner of the Sterling-Cooper dynasty, he is a man who appreciates the finer things in life and does not hesitate to pull out any and all stops in the name of business. His passion for well-crafted advertising schemes and the ability to detect competitors’ cheap imitations makes him a critical member of the company. I could really use a glass of scotch right about now.

Mies van der Rohe is considered as one of the leading pioneers of 20th century modern architecture. How can you not take someone with four names seriously? I mean, c’mon. Mies’ works are known for their pure clarity and expression of function, and have set a timeless precedent for what modern architecture should be. Oh, and about that scotch – more is definitely more. 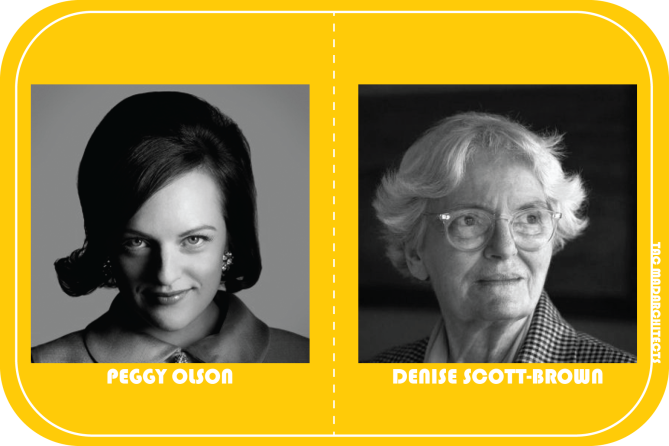 Peggy Olson: a woman whose apparent naivety serves as the perfect distraction to work her way to the top of Sterling-Cooper. Her ingenious talent and wittiness make her a natural for the advertising scene, and it is not before long that Peggy is making waves in New York City. Not literal waves, of course.

Denise Scott-Brown is an academic and scholar of urban planning whose prolific work (with partner Robert Venturi) during the latter half of the 20th century expressed a distaste for “arcane” architectural trends commonly found in modern architecture. She is also known to have rocked a pretty mean tweed blazer on many occasions. Oh, and she totally deserved that Pritzker. 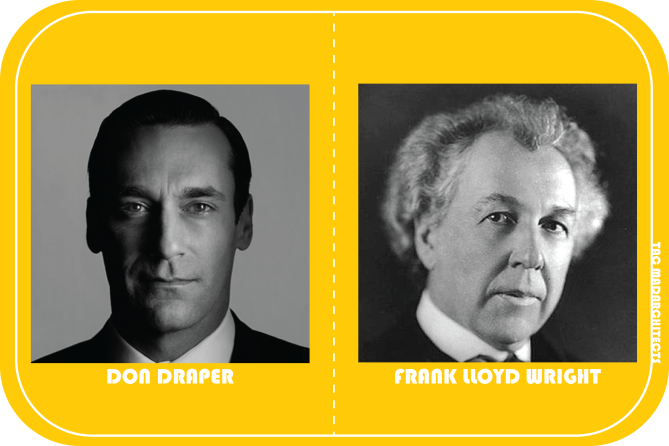 Don Draper: a man of contradiction and inner moral struggle, he is a staple at Sterling-Cooper and arguably one of the best ad-men in all of New York City. His cut-throat business tactics and stand-offish demeanor make him a perfect candidate for company leadership, as he exudes many of the qualities needed to succeed and rise to the top of the advertising food chain. Que suave.

Frank Lloyd Wright is undoubtedly one of the most well-recognized architects of all time, known for coining the term “organic architecture” – architecture that is in complete harmony with its surrounding environment. His influence has transcended generations well-beyond his life and death; wherever there is an architecture student – woefully cantilevering a meditation space 40 feet over a deep crevasse – there, too, is Frank Lloyd Wright. If that doesn’t spell “epic”, I don’t know what does.

Now, I really need that glass of scotch.

Tell me what you think. Cancel reply

THE [DIGITAL] DRAWING BOARD